A man in a mask, combat gear and glasses was shot and killed Monday morning in downtown Dallas after he opened fire with an assault rifle outside the Earle Cabell Federal Building. No one else was injured.
FBI Special Agent in Charge Matthew DeSarno identified the shooter as Brian Isaack Clyde, 22 at a news conference on a street corner near the federal building. Clyde died at the scene and was taken to Baylor University Medical Center, after police responded to an active shooter call, officials said.
Neither DeSarno nor Erin Nealy Cox, U.S. Attorney for the Northern District of Texas, gave any indication why Clyde would target the federal building. They also did not say who shot Clyde.
Dallas Morning News photographer Tom Fox witnessed the shooter fire outside the building on Jackson Street and took photos as the shooting occurred. Fox said the gunman fired from the parking lot across the street toward Fox, a security guard, a woman walking a golden retriever and a man who hadn’t tied his tie yet.
The window panes in the revolving door and two side doors at one entrance were broken afterward. It is unclear if the door was shot by the shooter or law enforcement.
Photos taken by Fox show law enforcement around Clyde as he lay in a parking lot where he ran after the shooting.
In one photo, a Homeland Security agent with blue latex gloves is hovering over Clyde. In others, Clyde is shirtless and law enforcement officers, including the agent, kneel around him. On Clyde’s left arm, he had a red heart tattoo black silhouette of a cat inside.
Fox, who was questioned by the FBI, said he was outside the building when a man in a mask parked on the corner of Jackson and Griffin streets. The masked man ran and then stopped in the street to pick something off the ground.
The man then began shooting at the courthouse along Jackson Street and cracked the glass of the door, Fox said. At least two bullets ricocheted off the building, releasing clouds of dust and debris. Inside the building security pushed everyone down to the ground.
The federal building is likely to remain on lockdown for the rest of the day. The building houses federal courts, the U.S. Attorney’s office for the Northern District of Texas, a passport office and U.S. Marshals Services.
The shooting is a block from the July 7, 2016 ambush where five police officers — four Dallas police officer and a Dallas Area Rapid Transit officer — were killed by a gunman. Nearby El Centro College was placed on lockdown. During the ambush, that shooter entered the school and fired from a window at the fifth officer who was killed.
Dallas police detonated a suspicious device around 10:40 a.m. found in the 2003 Nissan Altima Clyde drove to the courthouse. The blast was strong enough to shake several sapling trees blocks away. Police searched downtown for other possible devices. Many downtown buildings are on lockdown or evacuated. Several streets remain closed.
‘I just ran’ Ed Modla was working from home at SoCo Urban Lofts this morning when he heard at least 10 loud shots outside. He looked outside and saw the gunman running across Griffin Street.
“As soon as I saw the shooter I got the hell away from the window,” he said.He took another peek from his third-floor window a few moments later and said he saw officers “zeroing in” on the suspect across the street.Dallas police evacuated the apartment building around 10 a.m., going door-to-door to make sure everyone got out.
Judicial intern Thompson Du was waiting outside Monday morning after officials kept him from going inside. Du said his friends who were already nearby when the shooting occurred told him they heard shots for 45 seconds.
Don Miles heard 10-15 shots as he walked up to the Commerce Street entrance for his 9 a.m. appointment.
“I just ran,” Miles said.
Herman Turner, 50, took the day off work to run errands at the courthouse. He said he was on his way to get a cashier’s check when he saw the gunman run from the courthouse door near Main and Griffin streets, plant himself in the middle of the road and begin firing an assault rifle back at the building. 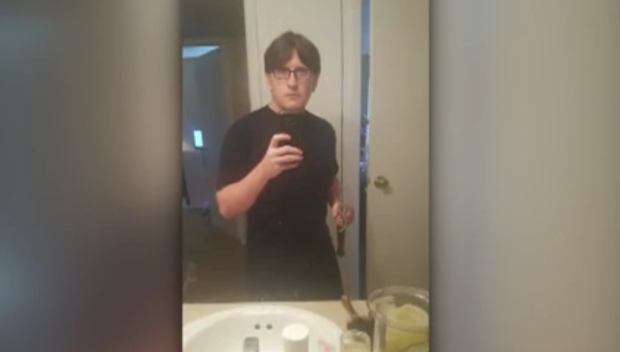 PLANO, Texas (CBSDFW.COM) – Was some questions about his mental health. The stepmother of the gunman shot and killed by security officers Monday outside the Earle Cabell Federal Courthouse in downtown Dallas said she had no idea Brian Clyde wanted to commit mass murder.

“It was so out of the blue,” said Heather Clyde. “Not near the surface of who Brian was to us.”
Heather Clyde, and Brian’s father, Paul Clyde, consoled each other outside their Plano home Wednesday afternoon.

Heather said they didn’t even recognize the photos of the partially-masked man who tried to shoot his way into the federal building, which houses several government agencies and 300 employees. Federal security officers shot and killed him before he could get inside.“We are so grateful no one was hurt or killed,” Heather said. That would have been a whole realm of Hell added.”The FBI has yet to figure out the motive for Clyde’s armed attack and his stepmother told CBS 11, she saw nothing, not in his social media posts or his interactions with them, that suggested he would try to commit mass murder.“We just wanted everyone to know we are flabbergasted as everyone else is,” Heather said. “He just wasn’t the person who is there downtown Monday morning, just not who we knew.”

Heather Clyde said she and her husband think Brian might have been trying to commit suicide, but they hadn’t seen any signs of depression or anger. “That’s our feeling. He knew there had been a shooting down there, a well armed area. That’s the only thing we can derive from his actions,” said Heather.Brian Clyde had recently graduated from Del Mar College in Corpus Christi with an Associate in Applied Science degree in Nondestructive Testing Technology.