The Conservatives so they call themselfs., Some of them are Libertarians, or call themselves Republicans, Tea Party, so on.

These Groups, are deceiving the public about Many things.

One Such Topic is Taxes! Read below what the Founding Fathers Thought of Taxes…. below is what Benjamin Franklin thought about Taxes.

I believe the people have been duped into thinking away from the Founding Fathers ideas and principles… one of them Taxes.

Yes we Need at times of trouble to raise money to help our Nation such as now, raise taxes on the supper rich and close loopholes!

If you read bellow you hear these people talk about taking money out of there pockets, etc, or leaving the United States with there money! Loopholes! And the government don’t have the right to come and take the Taxes, like the Bundy Ranch etc….

Funny the same brainwashing of our youth happened back then to. 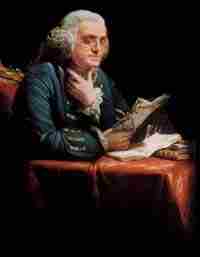 Photo from the American Philosophical Society. Of Benjamin Franklin…

Here is the writings of Benjamin Franklin, one of our Founding Fathers.

The remissness of our people in paying taxes is highly blameable; the unwillingness to Pay them is still more so.

I see, in some resolutions of town meetings, a remonstrance against giving Congress a power to take, as they call it, the People’s money out of their pockets, though only to Pay the interest and principal of debts duly contracted.

They seem to mistake the point.

Money justly due from the People is their creditors money, and no longer the money of the People, who, if they withhold it, should compelled to Pay by some law. End quote .. Smyth 9:138.
Year 1783

AGAIN ANOTHER WRITINGS OF THE GREAT Benjamin Franklin !

When The government finds it necessary for the common benefit, advantage, and safety of the Nation, for the security of our liberties, property, religion, and everything that is dear to us, that certain sums shall be yearly raised by Taxes, Duties, etc., and paid into the public treasury, thence to be dispensed by government for the purposes, ought not every honest man freely and willingly to Pay his just proportion of this necessary expense?

Can he possibly preserve a right to that character if, by any fraud, stratagem, or contrivance, he avoids that payment in whole or in part? Smyth 5:61. Year (1767) italics added.

Follow " Enquiry News Blog's." "The Truth Shall Make" "You Free" on WordPress.com
Join 844 other followers